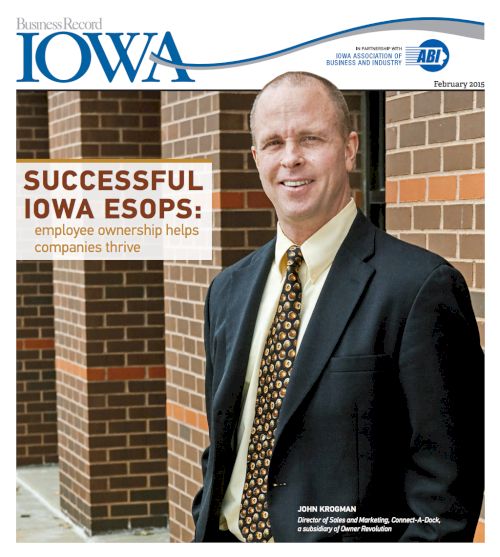 Learn more about Employee Stock Ownership Plans at the 2017 Taking Care of Business Conference. Nyemaster attorney Michael Dayton will walk through the ins and outs of ESOPs and what companies could benefit from the model. Leon Yantis or Ritchie Industries, Greg Stravers of PPI and Don Hudak of Owner Revolution, Inc., will share their own ESOP experiences. Click here to learn more.

When John Krogman joined Owner Revolution 15 years ago, he became more than the director of sales and marketing. Krogman was an owner. He and all of Owner Revolution’s 265 employees have investments in the company through an Employee Stock Ownership Plan, or ESOP.

Under this type of employee benefit plan, employees own stock in the company as part of their retirement plan. The ESOP model is gaining popularity in Iowa and around the U.S. for several reasons.

The structure can provide tax benefits for the party selling the company to the ESOP, employees may benefit from larger account balances when they retire, and studies show that ESOP companies typically are more productive and profitable than their competitors, said Greg Weber, a senior vice president at BCC Advisers in Des Moines.

Chris Schafer founded the company, then known as Schafer Systems, in 1986 as a manufacturer of lottery ticket dispensers for the new, fast-growing industry. Over the past 29 years the company has grown to include four subsidiaries that create everything from floating dock systems to high-end point of purchase product displays and dispensers.

When Schafer decided to retire about 16 years ago, he sold the company to the ESOP and it has continued to thrive, Krogman said. We have seen significant growth in revenue and stock value.

For many companies, one of the greatest benefits of an ESOP is the increased interest employees tend to take in the company’s success.

“Everyone is committed to making improvements because they know it is going to help their stock,” Krogman said. Selling the company to the employees also meant Owner Revolution would stay in southwest Iowa, which was important to Schafer.

“This was something he created, and this way, the jobs he created stay in his hometown. They are not sold to the highest bidder and moved,” Krogman said.

That was one key reason Cliff Wilson and his employees chose the ESOP route when Wilson was ready to retire about 11 years ago from the manufacturing company he owned, Ritchie Industries.

The company employs about 80 people in the 1,100-person town of Conrad north of Marshalltown.

“There are all kinds of equity groups trying to buy small manufacturers, but a company our size in a small town – it keeps it going,” said Leon Yantis, Ritchie CEO and Wilson’s son-in-law.

Federal regulations require that ESOPs be sold at fair market value. Wilson likely could have sold his company for more money to a third party. Instead, he had his employees provide a down payment and lent them the rest of the money.

Yantis says it was a win-win for everyone because the employees received a good deal on the loan, Wilson was able to make a premium on the interest as the loan was paid off, and, most important, the company stayed in Conrad.

“Our business is on Main Street, and now it’s owned by members of the community, not owned by someone on the outside,” Yantis said. “That’s good for our employees, our company and the community.”

Many ESOP companies also offer 401(k) options for employees, but employees receive stock in the company instead of a match to the 401(k). Ritchie, which manufactures automatic livestock watering equipment, offers both. The company’s benefits plan is a valuable recruitment and retention tool, Yantis said.

“We’re able to recruit from other larger companies even if our salaries are a little lower because the long-term payback is there,” he said.

While Ritchie Industries chose an ESOP model to avoid ownership by a third party, other businesses choose to join an outside company because of it.

Dexter Apache is an umbrella company with several operations around

Iowa and Wisconsin. It has operated as an ESOP since 1987, and as new companies are acquired, their employees become owners in Dexter Apache stock.

“The ESOP model certainly benefits a wider group of people, and that’s probably one reason why our companies chose to sell to us, because they like the structure and the previous owner wanted to take care of the employees who helped get them to where they are,” Kretz said.

Businesses of all sizes in many industries, both public and private, have ESOPs. Some are entirely employee-owned. Others only offer a portion of their stock to the employees.

“There is a lot of flexibility, and you actually see them in quite a variety of industries,” said Alice Helle, an attorney with BrownWinick law firm in Des Moines. “Whether an ESOP will work for a certain company often depends on the corporate culture.”

A company with high turnover, for instance, could run into problems because it would have to buy back stock each time an employee leaves.

ESOPs do require significant administrative work to be successful, Helle and others said.

They are regulated by the Internal Revenue Service and the Department of Labor to help ensure that employees’ retirement savings are being managed responsibly.

Often, a company will go through a feasibility study to determine whether the ESOP model is a wise choice. A valuation must be completed annually.

At Owner Revolution, the company also completes a repurchase obligation study each year to forecast how much it will likely have to pay employees who are expected to retire or leave the company in the coming years.

“We have quite a few employees all around the same age, so when they retire, that will be a big expense,” Krogman said. “We need to be prepared for that.”

There also is a learning curve for employees who are entrusting the company with a significant portion of their retirement savings.

“It can be challenging to communicate, and that’s something we focus on,” said Steve Doerfler, president and CEO of Metalcraft Inc., a label and radiofrequency identification product manufacturer in Mason City.

Doerfler’s company has an ESOP committee, which hosts lunch and learns to discuss how the model works and the value it provides to employees.

“You can never spend enough time communicating that,” Doerfler said.

Metalcraft became an ESOP company in 2006.

“We’re a very team-oriented company, and so we wanted to take that to the next level,” Doerfler said. “We all own our own home or vehicle. We thought, ‘Why shouldn’t we own our business?’ We thought we’d be better off than with a 401(k) plan, and in reality we are.”