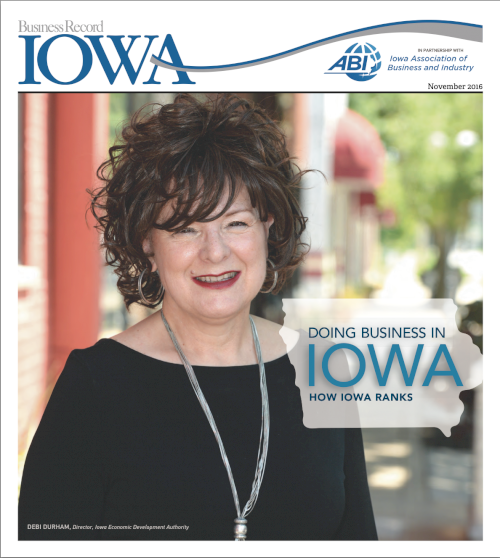 Iowa is a top place in the country to operate a business, to affordably live and for quality of life amenities, according to recent national rankings, but there are several areas in which the state can do better in order to ensure it has an adequate workforce and the resources needed to start new businesses and expand others.

CNBC ranked Iowa ninth overall in its 2016 “America’s Top States for Business” scorecard. The state is up from 10th position in 2015.

The state is second in the nation for the cost of doing business, ninth when it comes to quality of life for its residents, 12th in terms of cost of living, and 15th when it comes to business friendliness. Several of those factors are reasons businesses say their workers have stayed or migrated to Iowa and reasons businesses choose to locate here as well, said Debi Durham, director of the Iowa Economic Development Authority.

Vital to Iowa’s ability to maintain an educated pool of workers will be to ensure its workers and their families have access to amenities including entertainment options, education systems and affordable housing in all areas of the city, especially downtown for younger workers, said Georgia Van Gundy, the assistant vice president of government relations for Principal. She is in charge of government affairs for the company and works with local and state agencies and government, as well as oversees the company’s national public affairs.

“Quality of life in Iowa is outstanding we believe in comparison to other state,” she said. “We want Iowa to be more inviting for people to come here.”

Van Gundy cited the extension of civil rights for the gay, lesbian, trans- gender and bisexual communities, as well as a statewide smoking ban in public places as positive ways the quality of life has been improved in the state.

Fred Paulsen, a certified public accountant tax manager for CliftonLarsonAllen LLP, a business management/accounting firm with offices in Cedar Rapids and West Des Moines, said his firm recruits most of its recent college graduates from Iowa’s three public universities. More experienced hires move to Iowa either with young families or to start families because they like the quality of life, the closeness of the communities, the education system, the ease of transportation and the lower cost of living, including affordable housing, he said.

In addition to the workers, collaborative relationships between business and government, and among communities, also have made Iowa business strong, Paulsen said.

Mike Ralston, president of the Iowa Association of Business and Industry, said these relationships help make the climate favorable because businesses can easily connect to the resources they need to succeed. Business owners have access to programs, such as the Center for Industrial Research and Service, they need to run and expand their business, Ralston said. CIRAS uses a network of industry experts and university officials to help clients find solutions to specific issues.

He said it’s also easy for Iowa businesses to get a project or service into the market because public officials actively monitor regulations that prohibit business.

“We’re doing better when it comes to regulations in this state,” he explained. “By its nature, those industry regulators are coming up with more and more regulations, but also Iowa public officials, both Democrats and Republicans, are focused on making sure those regulations make sense.”

For instance, Iowa businesses collaborated with the Iowa Department of Natural Resources to streamline forms and to make the air quality permit process easier and more understandable. Businesses worked through Iowa ABI to make that happen, Ralston said.

Iowa’s workforce ranks much lower – 37th when compared with the rest of the nation. This is up from 44th in 2015.

Durham and the IEDA have seen success landing projects across Iowa that have brought quality, good-paying jobs, but she said businesses regularly share concerns about where their next generation of qualified employees will come from.

“For Iowa businesses to continue to grow and expand and to attract businesses to Iowa, the state must prepare its workforce to fill employers’ current and future needs,” Durham said.

Ralston said the workforce issue is twofold: Iowa needs to attract more people and ensure there are jobs for anyone who is able to work; however, he believes the workforce Iowa has is at the top of the list of strengths the state has to offer businesses.

“It’s highly educated,” he said. “People show up on time every day, and they’re highly productive. If you talked to any business, they would put their employees as their top asset.”

Iowa’s workforce is well trained because of the strength of the state’s colleges and universities, and specifically the community college sys- tem, which Ralston called a “gem.” Programs such as Elevate Advanced Manufacturing, a statewide marketing campaign that promotes careers and educational opportunities in advanced manufacturing, also connect Iowans with the training they need to take jobs in areas that need workers, he said.

Durham said it is critical to help students graduating from these institutions recognize the careers and opportunities available to them in Iowa.

“As I spend time with students, I see their enthusiasm and their desire to do something good for their world,” Durham said. “We are compelled to help these students understand the opportunities in front of them, right here in their home state.”

Attracting new people to Iowa is also critically important, Durham said. At Principal, workforce is an on- going concern and was taken into consideration when the company decided to renovate its campus.

“We want to make sure we have the right talent here in the state of Iowa to draw from,” Van Gundy said.

Principal has joined several initiatives with state elected leaders to ensure Iowa has the training pro- grams in place to fill future jobs and to replace retirees at a time when the state’s population isn’t dramatically growing. These efforts include training programs that align educational programming with the actual needs of the workforce and involvement in the programs that promote STEM (science, technology, engineering and mathematics) careers.

Ralston said business owners tell him there needs to be more money available for venture capital in Iowa. Venture capital is financing that investors provide to startup companies and small businesses. The risk is typically higher for these investors, and those who invested usually get a say in company decisions, which can be a downfall for the startup company.

He cited examples such as Central Iowa Power Cooperative, which has a subsidiary called CMA Ventures that contributes money to startups.

One area Iowa needs to improve upon is its tax system, according to the Tax Foundation’s 2017 State Business Tax Climate Index. Iowa ranked 40th overall in how well the state’s tax system is structured.

CEO Executive Magazine ranks the state 20th when it comes to taxes and regulations.

Business leaders agree that more can be done to improve the tax climate in Iowa but that the state is still well positioned as a leader when it comes to cost of doing business. Ralston suggested Iowa do away with credits and exemptions and make the tax base as big as possible in order to reduce rates.

“Iowa is known for its pro-business climate and that helps us to attract projects to our state and it helps us to keep existing industry expansions right here in Iowa,” Durham said. “We have maintained an overall low cost of doing business ranking despite a tax climate that is less than desirable for companies that are in the supply chain of our largest manufacturers.”

“Until that happens, businesses are going to fight for the credits and exemptions that are best for businesses,” he said.

Paulsen, the CPA, said Iowa’s tax climate is reasonable and its tax incentives and credits for a variety of types of businesses are a plus, but it’s difficult to compare the state with others because each state has its own tax structure and every tax has its own individual characteristics.

Iowa has a very attractive premium tax rate, which is where Principal falls, and that’s why a lot of financial and insurance service companies are attracted to Iowa, in addition to the modernized regulatory environment, which also is beneficial to this classification of business, Van Gundy said.